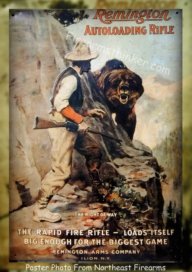 Remington Arms during the 1950s was probably in the top two of the gun companies at that time. Along with Winchester firearms they would be the premier gun manufacturers after WW II. The Remington Arms Company has been in business since 1816, and have been in the same location since then.

My focus is from WWII until the mid-1960s, and what I believe to be the golden age of classic firearms. Remington Firearms would be considered one of the top innovators of firearms at that time. They would produce some of the finest bolt action rifles and pump rifles ever made.

They had already established themselves with pump rifles before World War II. Remington Arms was king of the hi-powered pump rifle.

The model 14 and model 141 rifles in the pump action, I believe to be some of the finest rifles ever produced. I will spend more time on these Remington rifles in other articles.

By 1952 the model 141 would be replaced by the Remington 760 model that would become a classic in its own right.

They could be made into fine sporting firearms, but it would be difficult to convert them into slimmed down, more modern looking guns. And they were always a little heavy. The 700 Remington rifle would ultimately be Remington firearms crowning achievement in the bolt action rifle.

The Remington Arms company introduced the 721 and 722 bolt action rifles in the late 40s. This would start the Remington line of bolt actions that would eventually become the Remington 700 series. Over the long haul this Remington firearm would be the top bolt action, high powered rifle for 40 years.

Winchester was number one in the 50s, but the Remington Firearms would be tops for the next four decades. (IMHO) I will get into more detail about these Remington rifle models, and others in new articles.

I will not cover a lot of information on semi-automatic high powered rifles in these articles. There were many semi’s produced by different manufacturers, but I do not consider them as classic firearms of that time.

Winchester, Remington Arms, and Browning firearms produced some high-powered semi-auto rifles, and they were excellent guns, but they were never as desirable as the pumps, bolts, and levers. Also, some states, like Pennsylvania, did not allow semi-auto high-powered rifles for big game hunting.

One of the reasons that Remington Arms Company was able to keep its reputation intact was unlike Winchester firearms they would not change their manufacturing process so radically. Maybe because Winchester did change their firearms line-up quite a bit, the Remington changes did not get as much attention. Whatever happened did not affect Remington Arms Company as much and they would go on to become the premier hunting guns in America [IMHO].

Remington Arms Company would produce a fine line of 22 rifles at this time, but they would not be considered highly sought after collectibles. Some of the Remington pump 22 rifles produced in the 1950s are very fine firearms. And those in excellent condition do demand good prices, and would be considered good investments.

By  the 1960’s the Remington Arms Company would introduce a  new 22 pump rifle and a little nylon stocked semi 22 called the model 66. The new pump 22 would be the Remington model 572. Remington would produce a standard and Deluxe model in the 572 model. They would produce the same style firearm in a semi auto 22 called the model 552. Not a lot of collector interest but for a few variations that were listed in the early 1960’s. You could buy a 572 in a Buckskin Tan or Crow Wing Black with chrome plated trigger, tube, and floor  plate. ( This is very collectable). The early Nylon 66 model would be in Mohawk  Brown and Seneca Green. Apache Black would come later. This model does have good collector interest.


Remington Firearms produced an excellent line of high powered rifles in the 50s and 60s.

Many of these have become very collectible, and some in my opinion, are the best shooting guns for accuracy ever produced from an out-of-the-box commercial made firearm.

I have hunted and shot a lot of these firearms over the years, and considered some of them my all-time favorite guns. I will talk about some of those guns in other articles.

As I discuss these guns in further detail. I will get into the collect ability and alterations of individual models discussed. We will try and see how certain alterations can change how it would be judged by collectors looking to purchase that firearm.

Some of the alterations done in the early years were to make the gun more functional like drilling and tapping for scopes. This helped at the time, but nowadays, it may hurt the gun considerably. A lot of these guns are still great buys and make excellent hunting guns.

I have not mentioned any shotguns up till this point, as they probably need to be put in a category by themselves. Although there are some shotguns, like the 870 and 1100 that fit into this time frame. The golden age of shotguns in my opinion, would also cover a little broader area, because of the double barrels. I believe that the 1920s and 30s would also be heavily considered for shotguns. But that’s another story.

The Remington line of guns manufactured at that time may be some of the best deals in the firearms market today. A lot of their guns can still be bought at very reasonable prices and are fairly common.

So if you can pick one up and keep it in good condition, it will build value in time. Some of those firearms from this era will become more available as the men from that time either quit hunting or leave them for their estates to take care of.

Do check out my rating page for information on what makes a good collectible firearm.

ELITE FIREARMS OF THE LATE 1960s