The Remington Arms company started production of its Remington 721 and 722 in 1948. This was a totally new concept in bolt action gun design. The action was a total makeover of the traditional bolt guns before World War II. The rifle triggers would be a completely redesigned system. One of the best Remington rifles ever to be produced.


They would be the granddaddy of the Remington 700REMINGTON ARMS COMPANY series introduced in 1961. It also introduced the concept of a short and long action. This in my opinion was a great concept of Remington’s engineering at the time. They were drilled and tapped for scope mounts from the start of production. This also was good engineering concept at the time. The Remington Arms Company was on the move.

But I doubt the Remington firearms in model 721 or 722 would take a back seat when it came to accuracy. The 721 and 722 are probably a couple of the most accurate out-of-the-box bolt action rifles ever produced.

The Remington  721-722 have over the years been noted for their great accuracy. 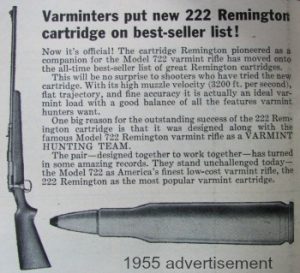 The gun shop I worked in was located in northeastern Pennsylvania. The 721 and 722 Remington firearms were very popular in that country. We bought and sold many of these guns at our gun shop. There always seemed to be one or two of these guns on the rack for sale and we had some hunters and shooters who would only buy the 721 or 722.

This is also a gun that I did work on while a gunsmith at the shop in Pennsylvania. I know I

blued many of these guns in the  1980s and 90s. They were heavily used and therefore the bluing would be worn and require a new finish. I would also install recoil pads on these Remington firearms in the 30-06 calibers. They were a simple design and the gun was therefore easy to take apart and reassemble. So I rather enjoyed working on them. Very few Remington Arms Company firearms had factory recoil pads installed on them in the 50’s and 60’s. Make sure you know before you buy as it does effect the price.

Any of these guns are excellent choices for hunting and shooting. They may not be great collectors guns, but they would still outshoot most of the new guns of today. I will discuss some of the issues with repairs for these guns in articles under alterations.