CLASSIC AMERICAN FIREARMS OF THE 1930s

I thought that a look at the Classic American Firearms of 1930’s era would give a little idea of the firearms manufactured right before the Golden age. The golden age of classic US Firearms would start right after WW II. The commercial firearms of the 50’s and 60’s would become some of the greatest rifles and handguns of all time (IMHO).

There was a vast difference between the 1930’s and the 1950’s in not only the firearms world, but in everything available in those years. The depression of the 1930’s would affect all areas of life. That would include firearms and accessories.

There was not a lot of money to spend on new style firearms and hunting accessories. The gun manufactures were not going to develop a new firearm and spend a lot of money setting up the manufacturing process and not have a market to sell it. People did not have the money in the 1930’s. By the end of the 1940’s the average man could now afford to spend a little money on the new firearms of the 1950’s. Vastly different times.

Classic US Firearms were on the way

but several other new Classic American Firearms.Remington Firearms would have the Remington Model 30 bolt action rifle. Remington would produce the Model 30 thru all of the 1930’s. Remington Arms would replace the Model 30 with the Remington model 720. These are both desirable collector firearms and are hard to find. They did make the majority of these firearms in the 30-06 cartridge. Any of the Model 30 rifles in any cartridges (25, 30, 32, 35 Remington, 257 Roberts and 7mm Mauser) are highly desirable.

The Winchester Model 54 was based on the Mauser style action. The Remington Model 30 would be based on the 1917 Enfield action. They would both be a basic military action that were utilized by Winchester and Remington. Winchester would introduce the Model 70 in 1936 that was a new design by Winchester. Remington would not bring out the new 721-722 design until 1948. The Golden age would just be getting started.

Winchester Arms would definitely be the King of the Classic Arms of 1930’s era.

There would be other Models but these would be the most popular. Many of these models would be quite popular in the 1950’s and 60’s. In February of 1933 Winchester would introduce the Model 54 in the 22 Hornet cartridge. Only in production till 1936, when the new Model 70 would be introduced. Winchester Arms would introduce the Model 64 in the new 219 Zipper cartridge in 1937. The 219 Zipper was a new cartridge from the 1930’s.In my article about the Classic Arms of 1953,

I would mention that Griffin and Howe would convert your Winchester model 54, 22 Hornet to the 222 Remington if you wanted the new Remington cartridge. You have to wonder how many of those conversions were done. Good thing to do back then. Not so good for the gun collector today.

REMINGTON FIREARMS IN THE 1930s

Remington would have other 22 rifles introduced in the 1930’s

Colt Firearms would introduce the New Service “Shooting Master” revolver in 1931. They would advertise that the Colt Woodsman would win the 1932 Olympics and was the most popular 22 automatic in the world. Very true at the time. True Classic US Firearms of 1930’s.

The 1930’s would have several Custom Rifle makers building nice classic firearms. The top custom gun maker of the 1930’s would be the Griffin & Howe gun company. You could have a custom rifle built on a Mauser action or Springfield action. In the early 30’s you could order the Griffin and Howe rifles built with the Winchester 54 action. They would also build competitive target rifles and did have one of their custom 300 H&H magnum rifles win at a Camp Perry Wimbledon match in 1935. Highly collectable Classic Arms of 1930’s era.

They would of course have a very popular scope mount that was very widely used in the 30’s 40’s and 50’s. Griffin and Howe did work very well and did give the nice touch of removing the scope quickly if the need should arise. I would be able to handle and work on several of these firearms in the 70’s and 80’s in the gunshop I worked at in those years. Very well built rifles and usually of the nice classic look that I liked in a good bolt action rifle.

Another popular Custom Rifle maker would be the Sedgley Springfield Sporter Rifles. They would advertise a Sedgley 30-06 complete for $71.00 in 1937. A good amount of money in those years. You could order one in 12 different calibers. Do not recall seeing one in all the years I would be around the firearms world. Classic american Firearms of 1930’s at its best.

Another Custom Rifle maker of the 1930’s would be the Pacific Gun Sight Company out of San Francisco, California. They would use a Springfield, Krag, or Enfield action to build your rifle. I did like the looks of the advertised firearms.You could get a nice group of cartridges to choose from with those Custom rifles. The 30-06 , 270, 7 MM Mauser, 257 Roberts, 250-3000, and even a 300 H&H magnum if you wanted. Not bad for 1933. Classic American firearms of 1930’s at its best.

Interesting to see the rifle scopes that were advertised in 1933. I did not think that the rifle scope was that well developed in the 30’s. Some would look much like the scopes of the 50’s and I was a little surprised by that. Interesting stuff in the Classic Arms of 1930’s.The Noske Rifle Scope and mount would be available for $40.00 in 1933. Really nice looking scope for the time. J.W. Fecker would advertise a 10 – Inch small game scope in 1933. Hensoldt would have a nice looking scope. And of course the Zeiss Rifle Scopes would also be advertised in 1933. They would have external adjustments and have that nice slim styling. 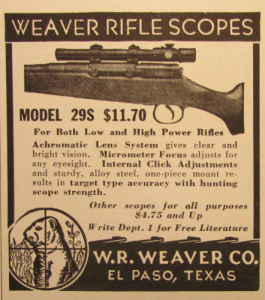 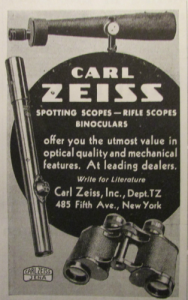 CLASSIC AMERICAN FIREARMS OF THE 1930s