The Marlin Rifle, The Workhorse

When you bring up the Marlin Rifle of the 1950s and 60s era. You would pretty much have to be thinking of the model 336 or the MODEL 39A. The model 39A was the only 22 lever action available until the end of the 1950s

Because they were pretty much the main guns that Marlin had at that time, they were big sellers. In the high-powered rifles the model 336 was a very popular gun in the high power lever action rifles. I will get into more detail about the individual Marlin firearms in separate articles about them.

Marlin firearms did make other rifles and shotguns but I do not consider any of those to be what I would consider classic firearms. They were good functioning guns, but they just did not have the styling or quality that I believed put them in the upper echelon of classic firearms.

They did make toward the end of the 1950s a Marlin lever action rifle that was called the levermatic. Although it was not a real fancy or stylish gun, it did have some unique features and a somewhat different look and had some good qualities. I will give that series of Marlin firearms, a little more time in a separate article.

The Marlin gun company was into the lever action market from around 1890 and was a force in the hunting rifle market. For many years, The Marlin rifle company made many quality lever action rifles that are still very collectible and desirable in the gun market today. We are concentrating today on the 1950s to mid-60s or so. As that is the era in which I believe was the Golden age of classic firearm.

I was privileged to work for the Marlin gun company when they moved to the Remington Arms Company in Ilion, New York. I was hired to assemble the 39A lever action 22 Long rifle guns. I did enjoy that very much, but was unable to continue doing that job because of health issues. But it was quite an experience to work in that environment. The Marlin model 39A is still assembled the same way it was 50 years ago and that part has not changed. I will get into more detail about the model 39A 22 lever action rifle in another article.

The Marlin rifle in the 336 model from the 1950s were very well made firearms. 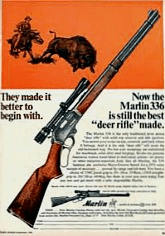 I did do a lot of work on those guns in our shop in Northeast Pennsylvania. I will discuss in other articles what some of the issues of these particular models were. I probably did more rebluing of those guns along with drilling and tapping than any other work performed on them. They were a very fine gun, and some of the older 336’s are starting to become a little more collectible. Especially if you can find the early ones that were not drilled and tapped.

The first year of production was in 1948 for the model 336. The first four or five years of production of that model were probably not drilled and tapped. I did drill and tap quite a few of these guns over the years while working as gunsmith.

Also finding them in good condition can be a problem as they were used as hunting tools and not necessarily something to look at. So the bluing and the stocks over the years have taken a good beating. If you can find one in excellent shape, than that will become a good collectible gun to acquire. But they will never be an excellent gun to collect, as there were many of them made and the interest in the collectors market is just not there.

Some of the Marlin firearms made before World War II, have become very collectible. And these are very scarce in good condition. One particular model is the model 36 that was made in a couple different variations. It had a case colored receiver which the 336 did not have and they are great guns to collect.

The Marlin rifle in the model 336 are one of the guns I would consider to be the working man’s gun. They were reasonable priced at the time, and were very reliable. Many men bought them, because of its styling, and that still gives it much attention today. The Marlin lever action rifles in model 336 are still made and have been in continuous production since around 1948.

They started to produce some other models in their 22 rifle line and in their high powered lever action rifle lines in the early 1960’s. The 336 in the 444 marlin cartridge was made available and became popular as a heavy brush gun. Marlin also came out with the model 60 in 22 long rifle in the semi-automatic. Although it was not a high quality classic firearm, it was very functional and became very popular as an inexpensive 22 rifle. I will talk more of some of these and other models in future articles.

I always liked the Marlin model 336 because of the ability to mount the scope on the top of the receiver. It just had a nice clean look to it. I did mount many scopes on these guns and particularly liked mounting the Redfeild scopes in the 2×7 power. The Marlin rifle and the Redfeild scope were a perfect fit (IMHO).