The Sako Rifle of the 1950s and 60s are an excellent line of Classic Firearms for the collector or hunting enthusiast. When I personally think of Sako Firearms I immediately think of the small action Sako in the 222 Remington cartridge. I remember many of these rifles coming through the gunshop in Northeast Pennsylvania in the 1970s and 80s. They were a lightweight short action rifle that were extremely fun to shoot. They would also be very pleasant to look at. One of my favorite Sako Rifles would be the Riihimaki 222 rifle.

In the 1950s and early 60s Sako Firearms would be manufacturing three styles of actions. The small action would be the L46 or Vixen model. The medium action would be the L57 Forester model and the long action model L61 Finnbear model. These models came in a variety of calibers and of course the common cartridges like the 308 and 30-06 will have less value and usually be in worse condition. 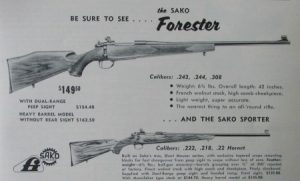 The model L46 in the 222 Remington cartridge is one of the most desirable Sako Rifles. Finding the L46 model Sako Rifle is a great find and getting hard to find not only in great condition but in any condition. These little Sako’s would get an Excellant rating.

The Sako rifle from the 1950’s are good collectable firearms for those serious about collecting vintage Rifles from that era. Yes they are hard to find but are one of those firearms that do not get the respect they deserve. The Sako Firearms can be bought at reasonable prices. (In my opinion) Anyone who is just getting into gun collecting should give these fine classic arms a good look. One great company of the golden age.

Visit my Gun Rating page to get a little more information on what is a good firearm to invest in.


The L57 Forester models in the medium action were also quite popular and also can be considered good investment firearms.

Sako would also make a long action rifle in the 1950s that was designed on the Mauser 98 action. These would be considered good collectible firearms also but are also getting hard to find.

One of my favorite Sako Rifles of the 1960s would be the Finnwolf model.

It would be a lever action rifle in the 243 and 308 cartridge and only be produced for around 10 years. They look much like the Winchester model 88. I always thought they had a little sleeker style than the 88. These also are becoming quite hard to find and are getting to be a little pricy. Even at the higher prices I believe these are great guns to invest in.

•    Watch for full stock variations (mannlicher)The Sako rifle from the 1950’s are good collectable firearms for those serious about collecting vintage Rifles from that era.

Condition is the Key with this fine firearm