Remington rifles after World War II and including the 1950s and 1960s would include a fair number of Remington Custom Shop firearms that are very collectible today.

The craftsmanship of those guns would I guess very from year to year defending on who was the engraver or custom gunsmiths that worked on that particular firearm. Cannot remember ever seeing one I did not like.

I always admired the Remington Custom Shop style guns which I consider the classic style and they did not vary from that style too much. I always thought their custom guns were not only pleasing to look at and handle but were not overly gaudy or Darth Vader type guns. I guess I heard some people mentioned the Darth Vader look on the more modern or progressive style and liked the description.

I was not a big fan of the later finishes that Remington would incorporate into their gun line. This would include all urethane type finishes that many of the gun companies by the 1960s started using.

I consider the Remington custom shop guns from the 1950s era with the more traditional oil finished stocks or classic varnish style stocks to be far superior in their quality and look.

I would also handle many of the Remington custom shop rifles  that would be ordered in various cartridges and configurations and wood quality depending on what the individual would order.

I always thought the old varnish and the oil finish would overtime acquire that nice patina that would come with aging and you just did not get that with the urethanes. The classic firearms in oils or those old varnishes would just acquire that distinctive aging look. I guess that made the gun what it is and the collectors of the Remington high grade rifles would especially like it. 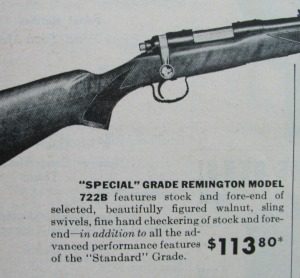 The Remington rifles have gone up considerably in value and you just don’t see a lot of them in the marketplace now and when you do many have started to command a very big price increase from what they were say 10 or 20 years ago.

When in the gun shop in Pennsylvania in the 1970s and 80s these firearms would come through the shop quite frequently.  My brother-in-law at the time would specialize in many of those Remington Custom Shop rifles.

As I recall spending $1000 on one of those guns was sometimes on the high side and would have to be really special to be above that. Now you are talking several thousand dollars for any good specimens of those D grade or F grades and classic rifles.

But in a lot of ways even today those numbers are really not that bad because I believe these guns are going to become harder and harder to acquire and the price will accordingly go up. So if you do spend $4000 or $5000 for one of those rifles I believe in another 10 or 20 years that could easily double or go beyond that because they’re just not going to be available.

In a lot of ways these are some of the best deals out there as they are still not considered the high class rifles that say the WINCHESTER 70 have become, but the price is considerably better.

If I was going to give those Remington Custom Shop rifles a ratings in the high grade rifles market, especially from the 1950s era I would give them an excellent rating. If you can buy them at reasonable prices then they would be a great investment and can add greatly to any collection.

Usually the Remington’s are pretty much what you see. They have not been messed with and don’t have some of the issues like the Winchester model 70s in the better guns and odd calibers.

The Remington High Grade Rifles are what they are and they would be pretty hard to duplicate and have not come to the point where it is worth it for cheaters to make high grade Remington Custom Shop rifles. There may come in time as they get more valuable but if you are collecting them now you are not going to have the issues like the Winchester collectible firearms.

Usually the Remington high grade rifles will not have issues with stocks cut or alterations as they were not intended for hard use hunting type rifles. So the men that owned them usually did not use them as they’re hunting firearms.

They are a good investment and I would advise those looking to invest in high-grade firearms to consider the high-grade Remington Custom Shop rifles.

B  Grade   (Checkered and Select Wood)